In this feature post Lothian Health Services Project Conservator Emily HIck talks about her current project and what it’s like to be working so closely with an archivist.

At the start of this year, I began a 12-month Wellcome Trust-funded project at Lothian Health Services Archive to conserve the UNESCO-awarded HIV/AIDS collections. This material documents the social and medical response to the HIV/AIDS epidemic in Edinburgh and the Lothians from 1983, when the first case was suspected, to 2010. In the mid-1980s, HIV infection rate in Edinburgh was seven times higher than the national average, which led to the city being dubbed the “AIDS capital of Europe” in the national press. The collections describe the changes in response to HIV/AIDS, from firstly focusing on homosexual transmission and infection through blood transfusions, then transmission between heterosexual partners and finally infection due to the sharing of needles and mother to child transmission. Edinburgh was unique in the fact that HIV was mainly passed through intravenous drug use. It is estimated that in the late 80s, approximately 50% of intravenous drug users had HIV. Policies formed at this time, in terms of awareness and prevention campaigns as well as care of patients, went on to inform national policy. As such, this is a unique and comprehensive collection of vital importance to our documentary heritage, hence its inclusion on the UNESCO UK Memory of the World Register in 2011. This project aims to ensure the physical stability and the long-term availability of the material for research and subsequently aid understanding of this unique period in modern history.

The collections are made up of a variety of media, mostly loose paper documents, but also badges, stickers, photographs, 35mm slides and canvas and plastic bags, as well as rubber and latex items such as condoms and balloons – making myself possibly the only condom conservator in the world! The material is in good condition overall, however, previous storage has led to planar distortion, creasing, tearing and the accumulation of surface dirt on paper documents. Damage to other items is often due to the inherent nature of the object. For example, rubber items such as the balloons have become brittle due to loss of plasticiser and objects have become stuck together due to the migration of adhesives. There is also a collection of digital media such as 3.5” floppy disks, VHS, audio cassette tapes and film reels which are in danger of becoming obsolete. Despite the recognised importance, much of the material has no secondary protection or has only been provided with basic housing on accession. My job as Project Conservator mainly involves conservation treatment such as removal of metallic fasteners, surface cleaning, tear repair and flattening and rehousing of the material in acid-free folders and boxes.

Figure 2. Boxes from Acc 10/04, on shelves before conservation

Of the twelve collections, four were uncatalogued at the start of the project. A Project Archivist, Karyn Williamson, was recruited in May to catalogue these remaining collections. Difficulties arose, however, as the conservation of the catalogued material was completed by the time Karyn began. This meant that the cataloguing and the conservation had to be carried out in tandem to avoid the interruption of the work flow. Working together, we came up with a temporary numbering system that allowed me to record what conservation treatments had been carried out on which documents and also allowed Karyn to begin box listing the collections. This means that although the order and composition of the collection may change, any conservation work carried out is always recorded.

Through working with Karyn, I have learnt a great deal about the process of cataloguing and what archivists actually do! I had trained in the conservation of works of art on paper, so I had little idea of how an archivist would record and order the meters and meters of documents in the HIV/AIDS collections. The materials used to create a fine art print and paper office documents are similar, so my conservation skills could be transferred to archival items, but I had no idea how an archivist would make sense of seemingly random papers in the collections. I now understand how a well ordered collection with a clear catalogue can aid access to the material and encourage use of the archive. For me, the whole point of conservation is to ensure that the useable life of the collection is extended for as long as possible. I believe archives should be used for the benefit of all, and not just locked away in a store room. I want the items to be seen, used and enjoyed (safely!) and through good conservation practice and a concise catalogue, this is possible! Karyn’s ideas on outreach; creating educational resources, oral history programmes and exhibitions have also been inspirational and injected new life into the project. As a newly qualified conservator who is used to working in isolation, it is great to have a new set of eyes on the material and has also given me ideas to take on for future projects.

Figure 3. Box of postcards, stickers and leaflets, before conservation. Items wrapped in tissue paper and tied with cotton tape, difficult to search through and view

I hope that working with a conservator has also been beneficial to Karyn. Many of the re-housing techniques I have used can easily be applied, by a non-conservator, to other collections. For example, using paper tabs rather than a plastic clips, which can cause planar distortion, to hold sheets of paper together and making bespoke boxes to house mixed material. (Shameless plug! – If you would like to find out more about the conservation of modern materials such as this, please see the LHSA blog for more information on plastic degradation, modern paper problems, digitisation of media and storage solutions for mixed archives). As a conservator, I have also been able to offer advice on digitisation and re-housing to groups who are considering depositing HIV/AIDS related material into the LHSA collection, as well as being on hand to deal with tricky material, such as pages stuck together with ink! 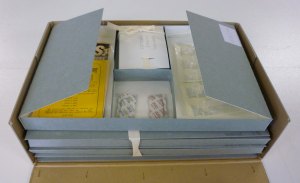 Figure 5. Paper documents and objects, after conservation. Items removed from paper collection and placed at top of box in bespoke tray.

Overall, I think the partnership between conservator and archivist working together rather than sequentially has been extremely valuable. Not just in terms of preservation and cataloguing of the material, but the chance to learn new skills from each other that can be taken on to new projects and the opportunity to collaborate on outreach activities.