On March 18, 2016, Sophie Hawkey-Edwards and I travelled from London to attend the ARA ‘Audience Engagement: Strategies and Practices’ training day being held at the bright and modern Cambridge Central Library.

The first speaker was Jon Elliot, Head of Public Affairs for ARA UK who discussed the ‘Explore Your Archive’ campaign in depth. He outlined the campaign’s drivers, to project the professions and the value of what you hold, with the intent to build new relationships with potential audiences and strengthen relationships with established ones. Archives were able to access a how-to kit that provided resources on which to build their own ‘Explore Your Archive’ days. 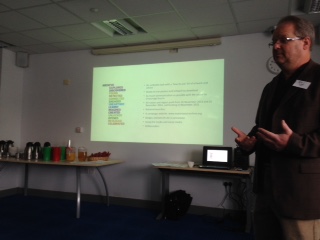 A recent survey found that those archives that participated in the campaign preferred a fixed start date annually for the campaign and no single theme. The survey found that all parts of the tool kit provided were useful, use of the ‘Explore’ branding was high, and it was believed to be successful for both individual archives and the sector overall.

Sandra Shakespeare, Outreach Officer at The National Archives (TNA), discussed the diverse audiences of TNA and the creative ways in which they engaged them. She highlighted the point that one shouldn’t assume that your audience will be limited only to the collection or exhibition source communities –  that people outside those communities may also have an interest.

Sandra also reinforced the centrality of your audience(s) to the projects you develop. You should build relationships with them and source communities and maintain those relationships, recognising their reciprocal nature. These relationships allow for  consultation and collaboration and open up more creative ways to engage audiences.

Tamara Thornhill, Corporate Archives Manager at Transport for London, provided a summary of how the archive at TFL has changed and how this was effected. Historically misunderstood within the organization’s context, “Why is it not in the museum?”, the goals of the archive are to increase awareness of the archive, establish support, and promote the archive’s collections and services as an asset for TFL. Their plan was defined by short and long-term goals and concentrated around targeting audiences and advocates, clarifying branding and message, updating their online presence, and taking opportunities to develop their  exhibitions and talks.

The archive has a special limitation in that they have no permanent exhibition space and thus use meeting rooms and for a very limited time (2-3 days). Since 2010 the archive exhibitions have changed are now themed, they have handouts and targeted publicity, include talks and guided tours and are open longer. They also include new material to highlight the relevance of TFL staff’s day-to-day work to the archive now and in the future.

The archive also offers talks to staff and the public which challenge perceptions, are interactive, interesting and informative. These changes have allowed it to meet its goals and has also increased understanding of what they do, funding for staffing, requests for talks and inclusion in wider TFL projects.

Liz Rees, Head of Archives and Collections at Tyne and Wear Archives and Museums gave an introduction to using social media and discussed how her archive makes use of social media. Liz mentioned two points that resonated with me around reasons why some people do not make use social media in their everyday work:

The archive’s Flickr has been their principal social media success story. They joined Flickr Commons where they are constrained to provide copyright-free material only to an already established audience. They use their lower resolution, copyright-free material to stimulate interest for users to buy their higher resolution digital images. Since 2011 they have had 20 million views of the images they make available on Flickr and some very interesting engagement.

Of the other social media platforms they make use of (Twitter, YouTube), Liz felt that Facebook had a number of annoyances; their top stories default newsfeed, poor analytics, advertising, and it can be difficult to engage meaningfully with users and the public.

Jenny Moran and Robin Jenkins are Joint Managers at Leicestershire, Leicester and Rutland Record Office and they presented one of the funniest and most engaging talks I’ve ever attended, titled ‘In the Frontline: World War I at the Record Office for Leicestershire, Leicester and Rutland.’ They are rising to meet the same challenges that many other archives and cultural heritage institutions face:

Despites these barriers, they and their staff were able to create a wide range of engaging events and resources built around their knowledge, especial skills, and collections. This was done by taking a “go out with a bang!” strategy: their cunning plan was to continue business as usual and, in fact, do more – recognise the importance of staff morale, and not to give up.

The strategy resulted in improved staff morale, a willingness to take risks and engage with audiences in creative ways. One particular example they gave was their WWI trench built next to the car-park. It is used as a learning space in which children take part in role-play as soldiers and other personnel, as a community space when appropriate, and is used for a Christmas carol event with staff singing Stille Nacht from the other side of the car-park.

Impacts from this approach include a raised profile for the records office, inclusion in the implementation of an HLF-funded project (Century of Stories), and a higher likelihood that the institution will survive.

The final speaker was Jessamy Carlson, Partnerships and Programme Manager at the National Archive who spoke of their “Fun Palace” event held at the archive. Fun palaces seek to engage local people in local institutions and their theme was “The Chimp who went to War.” The fun palace was aimed at children and involved a number of activities such as: tracing the path the boats took overland to reach the lake on a giant map; creating paper boats; designing uniforms; and a sculptural collaboration between an artist and the children.

In terms of marketing the event Jessamy was surprised to learn that half of the people who attended discovered the event via the sandwich board by the gate to the archive so advertising physically to local communities should not be discounted.

So what useful things could we take away and use to develop our own audience engagement at Conway Hall? Many of the suggestions made by the speakers we are already considering. The ‘Explore Your Archive’ campaign is on our radar and is now a firmer possibility for us to go ahead. The boldness of Jenny and Robin’s strategy reminded me that constraints are not always limitations to creative endeavours. We are especially interested in developing relationships with our local communities and this could be done by taking part in the Fun Palaces campaign.

The training day was very worthwhile in terms of lessons learnt or reinforced with a well-balanced set of speakers for different perspectives.