More Experience Required: The Trials and Tribulations of a New Professional – Anouska Lester

Four years ago I applied for my dream job: an archive traineeship at Windsor Castle. Thrilled to receive an invitation to interview, I spent hours in the library doing research. I rehearsed and re-rehearsed my strengths and weaknesses. I started teaching myself Latin. The interview, when it finally came, was one of the best I’d ever had. Not just in terms of my own performance, but in the questions they asked: these were questions that interested and stimulated me; questions that mattered. “This is it,” I thought.

A few days later, I was rejected. “More experience required,” they said. That old chestnut. Being the kind of person I am, I took “more experience” to mean “more education”, and started a Masters degree. After two years learning paleography, codicology and Latin, I applied again. Not even an interview.

This time I decided to get some practical, hands-on experience. I thought I’d start somewhere familiar. I have a few years’ worth of experience in theatre design, and so set about researching, emailing, and applying for placements with a theatre connection. Rather than send completely unsolicited emails I worked from the recommended lists of APAC and ARA. Roughly 30% of the time my emails have resulted in placements, normally with about a six-month wait. But I will say that everyone replies, offering advice and encouragement even when they can’t offer placements.

So far, everything I’d applied for was based in London. At best, this is an hour and a half away from me. So, what could I find closer to home? And here’s the rub: “home” is Milton Keynes, the UK’s newest “new town”, and the butt of a whole host of jokes revolving around its lack of character and culture. At 51 years old, it’s not exactly drenched in ancient history. This is the town that, instead of a central museum, has an unfinished plot of land and a whole heap of abandoned good intentions. The place that has to keep all of its official records in another town. 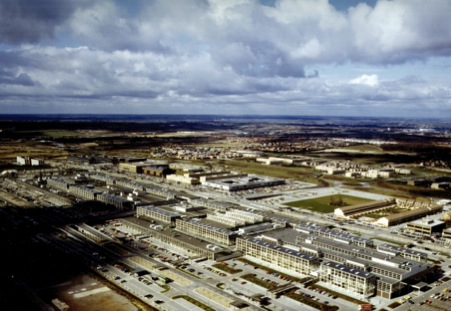 At a loss, I started volunteering with my local library, figuring it was a step in vaguely the right direction. Eventually, in about as roundabout a fashion as you’d expect from Milton Keynes,  I found an opportunity volunteering in Milton Keynes Museum in their archive. The best news was that I could start immediately. 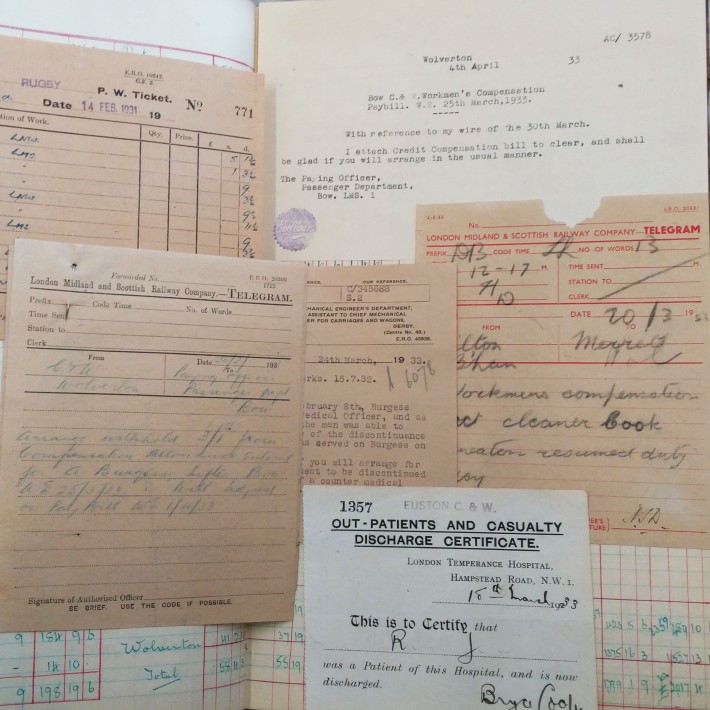 Book cover and selection of documents from the Ambulance Room of Wolverton Railway Works (WWO/58,WWO/85). Courtesy of Milton Keynes Museum.

Not unlike my career, the collection at MK Museum is in its very early stages of development. In a way, this has been ideal for me, as I get to start with the absolute basics of packing and listing a collection. The particular collection I’m working on consists of documents related to accidents in Wolverton Railway Works dating from the late 19th to mid-20th centuries. I’ve mentioned an interest in theatre, and there’s a reason I didn’t also mention an interest in trains. As such, I certainly couldn’t have predicted how happy I’d be spending hours poring over accounts of other people’s accidents. I was quickly captivated by the snippets of personal stories in each of these documents, as they confronted the challenges of manual labour, illness and war.

No gloves, but methylated spirits for “thoroughly harden[ing]” the hands of workers at Wolverton Railway Works in 1932. (WWO/120). Courtesy of Milton Keynes Museum.

After a few months of trains, a rather extraordinary opportunity came along. As part of a placement at the National Theatre’s archive, I began working as a research assistant for Dr Daniel Rosenthal, editor of the forthcoming book Dramatic Exchanges: The Lives and Letters of the National Theatre (Profile Books, November 2018). I have been transcribing the correspondence of some of the 20th-century’s most notable theatrical figures. Of course, to transcribe the letters, I first had to find them. Sections of the National Theatre’s archive haven’t been catalogued, and sections have been re-catalogued numerous times. So when the references you have are 10 years old, it’s very easy to get lost in the collection. It turns out, though, that this was a gift. It’s a radically different way of engaging with archival research compared to, say, turning up at the British Library and being handed exactly what you want. With some lateral thinking, patience, and luck, order emerged; the end result being I became far more familiar with the archive than if I’d been photocopying and making tea.

The hardest thing about this placement was not finding the material, but resisting the temptation to sit down in the basement in a fort made of acid-free boxes and immerse myself in the letters of Peter Shaffer, Tom Stoppard, Maggie Smith, Ian McKellen, and hundreds of others. And this isn’t just about the glamour and celebrity of it all; these are business letters – the letters of people at work, creative people working at the business of ideas. Having sent my own fair share of letters asking for work and support, I couldn’t help but relate. These are the letters of real people talking about their hopes, dreams, and fears: whether that dream is to act in their first production or to dedicate their life to creating a theatre for the British people.

After a gruelling day getting emotionally embroiled in bits of paper, I’d have to face the two-hour journey home. On top of this, I was using my annual leave from my day job to spend most of my salary on train tickets. Despite these challenges, I’ve never felt under-appreciated or superfluous as a volunteer. Many institutions wouldn’t be able to function without the time and dedication of people working for free. Still, it’s a huge commitment, and one I’ve had to plan carefully to be able to afford. Is it worth it? When you open a file to find a letter from Mrs Bloggs who saw Olivier’s Othello, or from Yves Saint-Laurent: yes, of course it’s worth it.

As with anything, in looking back you can construct a history of yourself that proves you were always working towards this point. I was Archives Prefect at school. My first job was in a library. But the truth is I’ve fallen from one job to another without much real sense of a narrative. Event Co-ordinator, Proofreader, Website Administrator, Theatre Designer. I even briefly sorted Christmas post for Royal Mail (which, trust me, is even less glamorous than it sounds). Sometimes I get jealous of people who’ve always known they’ve wanted to do x, and they’re barely out of their teens and they’ve landed their ideal job. But in reality I know that the experience I have elsewhere can only feed the work I do, and hopefully make me an appealing candidate (though I’m still waiting for evidence of this). And having made a conscious decision that this is what I want to do, I can now dedicate everything I have to it.

While I’ve continued to be unsuccessful in my applications for paid traineeships or assistant roles, there is a happy ending. I’ve recently started an administrative role with the Living Archive in Milton Keynes. It’s a brilliant organisation that collates and celebrates the stories of the people of MK, specialising in collecting oral histories. Already I’m working on Heritage Open Days, films on the MK Development Corporation, and interviews with locals about their memories. I spend my days learning new things, sharing forgotten stories, and creating order out of chaos. Every time I get that thrill of discovering the person behind the paper, I find myself thinking again, “this is it”.