In March 2018, Liverpool-based artist Jonathon Beaver became the first to take up the position of Artist in Residence at Liverpool University Centre for Archive Studies (LUCAS). This new collaborative project aimed to widen the public reach of LUCAS’s work, as well as provide opportunities for students to gain valuable experience working with creative practitioners in archives. Over the course of the three-month residency, Jonathon worked with LUCAS students and staff to create a body of work that reflects upon material discovered in Merseyside’s archives. The process will culminate in an exhibition intriguingly titled ‘Dream of the Dead, Hear from the Living’, opening 9th May 2018 at Domino Gallery, Liverpool.

‘Dream of the Dead, Hear From the Living’ cross stitch by Jonathon Beaver.

The exhibition opening date is no coincidence. It was in the first week of May one year ago that Jonathon’s grandmother Patricia O’Leary, known in the family as Grandma O, passed away. Born in the Bootle area of Liverpool (then West Derby) in 1929, Grandma O was superstitious, and ‘Dream of the dead, hear from the living’ was a phrase Jonathon often heard bouncing around her house as he was growing up. The coincidence of the beginning of the residency and the anniversary of her death began Jonathon’s reflection on “the phrases, habits and memories that disappear from history so easily”. The uncanny saying has its origins in British folklore, which holds that if you dream of a family member who has passed away, you will shortly hear from a hitherto distant friend or relative.

Jonathon has been working closely with LUCAS student Beth Grant over the course of the residency. Beth has acted as Jonathon’s guide to archival research, accompanying him on visits to the Liverpool Record Office and constructing a family tree for the O’Learys. “When I began the residency and I was offered a research assistant, I wasn’t quite sure what to expect” Jonathan reflects, “but the process been really good, and Beth has opened up the past for me through archival resources and tools ”.

The search has lead the pair as far afield as Ford Catholic Cemetery, a site about six miles outside of Liverpool city centre and one of Liverpool’s largest places of burial. There they were able to locate the death records of several family members. They were also able to locate the grave of Patricia’s sister Gabrielle, who died aged just 21 months in 1935. No cause of death is recorded, but the family rumor had always been that it was an accident that happened at home. The story of the existence of this child was something of an unconfirmed family tale which Beth’s work was able to shine a light upon. The search for the grave, which saw them roping in the cemetery’s grave digger, is one of the many stories that has fed directly into Jonathan’s work to be included in the upcoming exhibition. 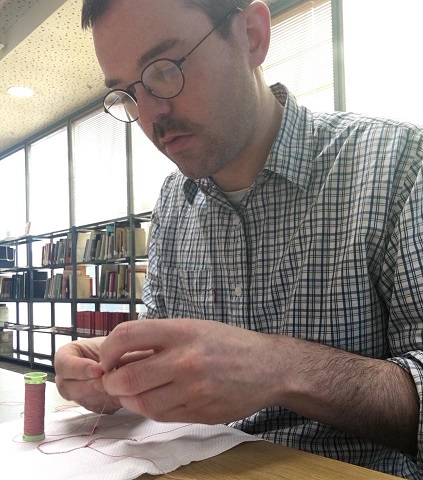 Jonathon’s past work has often employed cross stitch and embroidery techniques. Often found in domestic settings and considered feminine occupations, these craft methods have allowed the artist to question gender expectations and invoke the queer family. His work also draws upon the LGBT experience, growing-up and the ideas of family and home. For this project Jonathon was also particularly keen to explore his own family’s Liverpool connections. For her part, Beth was drawn to the project as an extension of her experience working with fine art institutions and on public exhibitions. Previously Beth has worked on archive-centred exhibitions with the Museum of Liverpool and with the archive of the Bluecoat Gallery, Liverpool’s centre for contemporary arts. In line with the mission of the project, public outreach events including a sewing circle are also planned to engage a wider community with the work of LUCAS and Jonathon’s art. 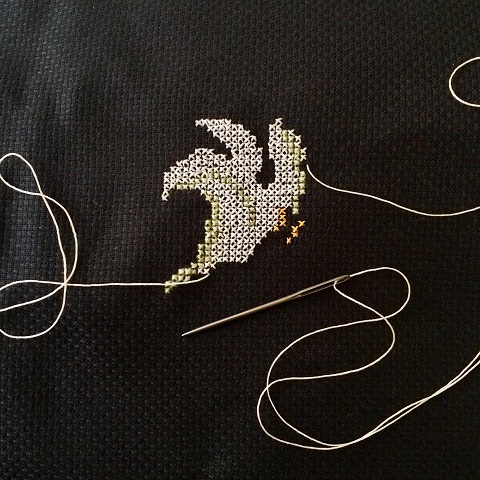 The collaborative process between artist and university has been one of great mutual benefit. “The resources, tools and expertise in working with archives is not something I would have been able to tap into before the project started” Jonathon notes. “As an artist you can get wrapped up in your own thoughts in the studio. I think accessing other people’s thoughts, expertise and knowledge has certainly been enriching for me as an artist”. Beth’s background in historical research combined with Jonathon’s creative approach has resulted in a body of work that takes a view of records that is both emotional and personal. Jonathon’s art is a reminder that behind records and data are real people and families with histories and mythologies of their own. Creative and artistic approaches to archives can begin to peel back these layers.

More information about the artist and exhibition can be found at: