During the Spring term of 2019, Archives and Records Management students at the Liverpool University Centre for Archive Studies (LUCAS) who were taking the International Record-keeping module had the opportunity to contribute to the Refugee Rights in Records (R3) project led by Anne Gilliland at the University of California, Los Angeles in conjunction with James Lowry of LUCAS.

The R3 project is a response to the record-keeping issues faced by the vast numbers of forcibly displaced persons around the world. The United Nations estimates that 70.8 million people have the status of refugee, asylum seeker, internally displaced person, stateless person or returnee. These staggering numbers prompt many questions around records created and used in the process of moving from one place to another, the actions occurring at each stage and their repercussions for displaced people and their descendants. Issues around borders and nation states, laws, citizenship and identity as well as resource allocation, security and wellbeing are quick to emerge, and important to address.

Slide from the training materials created by LUCAS students illustrating the number of word occurences in the privacy policies of Twitter, Facebook, Whatsapp, Linkedin, Snapchat, and Google. The bigger the word, the more occurences can be found.

Official records are considered “pervasive and integral” to people’s lives yet the importance of creating, keeping and maintaining such documentation is often not emphasised for many who find themselves displaced. This is where we (LUCAS students) have been working on creating resources for a two-day workshop for refugees and asylum seekers now living in the UK. Following discussions with the local refugee community, our task was to create resources to explain the nature and importance of records to those crossing borders into different jurisdictions and consider documentary requirements for re-establishing their lives in a new place. These materials will be trialled in the UK and America before being adapted for other audiences in the future.

On the practical side of things, we were first asked to think about what the record-keeping issues might be for someone having to begin a new life in another place. This proved extremely thought-provoking, and of course we concluded that there are no easy answers. As each individual case will be different, we realised that we would need to provide flexible and broad guidance so that the resources could be useful and, importantly, accessible to the highest number of people.

In Liverpool, posted on a wall in a popular part of the city, there is ‘The List’, an art installation from the 2018 Liverpool Biennial documenting the 34,361 asylum seekers, refugees and migrants who have lost their lives within or on the borders of Europe since 1993. Witnessing the names – or blank spaces with only descriptions – was a profound experience, and only spurred us on during this project. We wanted to create something with real value for those in such a tumultuous and frightening time in their lives.

We split into four groups that each considered one of these themes:

Our deliverables were to be a set of learning outcomes, a lesson plan, and slides/handouts for the session leader to use. We also agreed to approach our work using the Design Justice Principles, thinking critically about the impact of the resources we were creating and considering different learning styles and accessibility issues. Notes were to be highly visual rather than wordy, to help bridge language differences, and throughout the process we were careful not to take cultural or technical knowledge for granted in our examples. 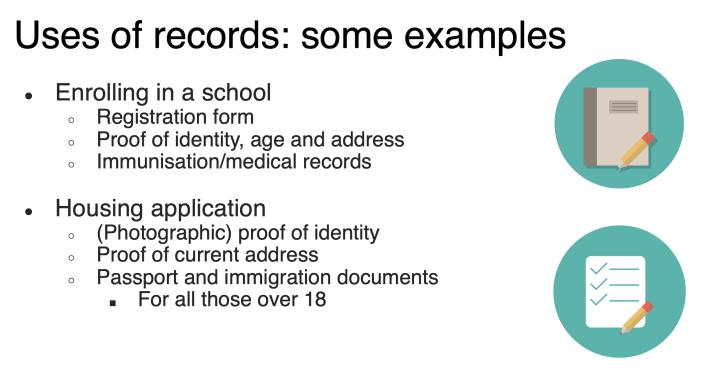 Slide from the training materials created by LUCAS students designed to show participants what records might be required for two processes in the UK.

Each of our groups created information sheets, presentations, and plenty of group activities to help the workshop attendees feel part of a learning community and comfortable to ask questions and share knowledge in a relaxed environment. Sometimes we drew on archival theory, but often we felt practical examples and relatable real-life situations would be the most helpful, and so plenty of time was allocated, in the lesson plans, to speaking with each other and having space to consider personal and familial issues throughout the workshops.

At the end of term, we presented our work to each other, which was a chance to feed back and see if there was any overlap between our sessions or any improvements we could make. Following these revisions, each section is now being consolidated by one of the student team and will be presented for review and trial shortly, initially in the UK. We hope that the materials that are finally published will be able to be adapted appropriately in other jurisdictions.

The R3 project, for me, has been a fascinating insight into some difficult real-world dilemmas involving record-keeping. It has meant putting theory into practice, and we have had to consider fundamental human rights issues as well as which and whether documents remain valid from one jurisdiction to another. As work continues through the Refugee Rights in Records project, more practical resources will become available, and I sincerely hope that it will be of assistance in addressing the many complex records issues faced by forcibly displaced people.

If you would like to find out any more about the R3 project, further information is available on the UCLA website, here.