Racial Intersectional Equality in the Archive: What We Can Take Forward from the ‘Decolonise the Curriculum’ Movement – Emma Pizarro

Decolonisation describes efforts to confront and undo the ongoing power structures established through colonialism. Discussions around decolonising the curriculum have been taking place in universities for some time now, with growing recognition of the affirmative impact that seeing yourself represented in conventional education can have on groups more conditioned to exclusion (black, Asian and minority ethnic people, women, and those from LGBTQIA, disabled, working class, and neurodivergent backgrounds, for example). 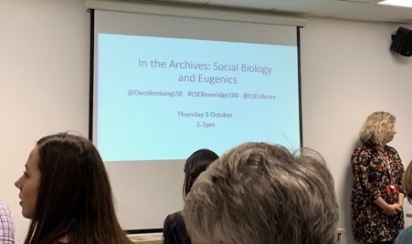 In the UK, student-led campaigns emerged in protest against the institutional whiteness and structural biases which pervade the university experience (see ‘why is my curriculum white?’ and ‘why isn’t my professor black?’), inspired in part by global activist movements such as ‘#Black Lives Matter’ in the USA and ‘Rhodes Must fall’ in South Africa. Decolonisation discourse has moved steadily from the margins to occupy a more prominent position on the agenda. As just one example, a ‘Decolonising LSE’ week was hosted last term as part of the university’s public programme of events. This included a talk by library staff that used documents from our archives to highlight the London School of Economics’s historic relationship to eugenics.

Despite many universities being aware of and engaging with decolonisation activities and initiatives to widen inclusion, radical change is yet to occur. A report published by the University and College Union last year revealed that in the 2016-17 academic year 25 black women were recorded as working as professors, compared to 14,000 white men, and the content of most reading lists remains predominantly Eurocentric. Some critics counter that current diversity initiatives simply serve to manage existing inequalities rather than eradicate them and that, as a precondition to participating in university life, BAME staff and students are forced to assimilate into a culture which privileges whiteness.

When universities continue to produce white male-dominated reading lists this sends a clear message to students about which voices are attributed intellectual authority. Research carried out by Jess Crilly (Associate Director, Content and Discovery, Library Services, University of the Arts London) has revealed that lack of diversity within collections and course reading lists are experienced by BAME students as micro-aggressions which erode their confidence and sense of belonging.

Due to institutional history and geographic location, it is inevitable that many collections based at UK universities will be Eurocentric. However, decolonisation initiatives do not require the wholesale dismissal of European knowledge or the elimination of white men from the curriculum. Decolonising the curriculum is more accurately understood as concerned with challenging the assumptions of the canon and interrogating longstanding biases and omissions, to allow for the inclusion of a broader range of perspectives and greater recognition of the contributions of non-dominant cultural groups.

‘Eugenics and the poor law’, typescript precis of a lecture delivered to the Eugenics Society by Sidney Webb, one of the founders of the LSE. From LSE Library collections, COLL MISC 0181.

Crilly’s research also found that students do not view libraries – and, by extension, archives – as neutral spaces. Although there are those in the profession who argue that archivists ought only to inhabit the role of impartial custodians, dissenting voices which posit archival neutrality as a myth are growing in number. This line of thought is particularly evident when considering the day-to-day tasks of appraisal and cataloguing, in which archivists must repeatedly decide what to include, highlight or exclude altogether. A number of us may well be able to identify collections amongst our organisation’s uncatalogued material which have not previously been prioritised for cataloguing because assessment took place within a frame of reference determined by the cultural values of the powerful.

Lae’l Hughes-Watkins (University Archivist for the University of Maryland), during her keynote speech at the DCDC Conference 2019, also pointed to collection development policies as an example of the non-neutrality of our work and urged practitioners to favour social justice in decisions about what to collect and preserve for the future. Whilst the link between archives and social justice is perhaps well-established, problems can arise when justice is seemingly at odds with archival principles. There is a need for archivists to recognise that many of the practices we employ were formed by a colonial mind-set and that rigidly sticking to concepts of ‘best practice’ and refusing to expand our theoretical frameworks perpetuates existing power structures and may be a disadvantage when trying to engage with oppressed and marginalised communities.

When considering ways we can decolonise archives and archival practice, useful resources have been produced by UAL Library Services and by the Archives, Records, and Memory class taught by Michelle Caswell at UCLA. Cataloguing is a method of knowledge control and it is important that materials are described using anti-oppressive language and, where possible, in terms which the records-creators or communities to whom they relate wish to be described by. Finding aids which use outdated or offensive language should be updated, with changes to the original descriptions recorded to provide researchers with additional context. An example of this in action is the re-cataloguing of the National Archives’ Colonial Office correspondence with the West Indian colonies. This project removed derogatory terms from the catalogue and sought to redress the imbalance which resulted in the names of colonial officials being recorded whilst those of local people were omitted.

We must proactively implement policies to collect materials representing and created by people of colour and marginalised groups and work to create displays and outreach materials that demonstrate that these communities are valued. Archivists should seek to highlight diverse stories and amplify the voices of the marginalised within the collections they care for, as well as supporting opportunities to generate new content through student-led projects and workshops. UAL’s ‘Decolonising the Archives Research Residency Programme’ is further demonstration of their commitment to decoloniality, by funding projects which encourage engagement with material in their collections to challenge dominant narratives using decolonial thinking.

Archives are undoubtedly sites of power, exhibited both as the power to include and the power to exclude – where archival silences are created. Carrying through the project of decolonisation requires that archivists acknowledge, as Jarrett M. Drake expresses it, the ways in which the oppressor manifests itself within each of us. This means we must ask difficult questions of our profession, continue to challenge our established practices and work to dismantle the inherent biases which stand as barriers to access.