How I Started – Nessa Dundon

I wish I had known what an archivist was when I was 17. With History being my favourite subject at school, and having absolutely no idea what career I wanted to pursue, I decided to keep studying it at university and think about all that career stuff later. Nine times out of ten when someone asked me what I was studying and I replied ‘History’ the inevitable question of ‘and what can you do with that?’ followed. I never had a good answer, all I knew was that I didn’t want to be a teacher or an academic but I still had no idea what I wanted to do when I graduated with a degree from the University of Limerick in Ireland.

I moved to Scotland after university and decided (after finally having a proper think about that career stuff) that I wanted to work in film and TV so I did some unpaid internships which led to a job at a production company. This was to be my accidental entry into the world of archives. As an office runner, I did a bit of everything, including helping the archive researcher. I soon realised that being an archive researcher, the job that most people in the world of film and TV find boring and difficult, was something I loved.

I worked in TV for 8 years, mostly for the BBC, initially as an archive researcher then as archive producer. I really loved aspects of my job but realised after a while that TV was not necessarily for me (in spite of the opportunities it gave me, like getting to drink with Michael Palin in a Glasgow hotel and hanging out with Alan Bennett and Neil Gaiman at literary festivals!). I often thought about how great it would be to work in the archives that I used so often for research but felt I might have left it too late. I was then inspired by a close friend who, after a number of years in unfulfilling computer science jobs, decided to retrain as a chef in her thirties.

So last year, at the not-so-youthful age of 36, I began a distance learning course in Archives and Records Management with the University of Dundee. It was a scary experience going back to the world of academia and definitely took a bit of getting used to, but being able to study remotely is great for me as I can continue to work full time. I had planned to keep working in TV while I did the course but a Graduate Traineeship at the Ballast Trust in Glasgow came up and I decided to go for it. I was delighted to get the position but a bit wary about going into an entry level job having spent the last few years at a more senior level, but it has been a wonderful experience. 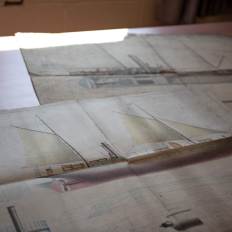 The Ballast Trust is a great place to work as it is not a traditional repository but rescues, sorts and catalogues archive materials for a wide range of businesses in Scotland. I’m getting the opportunity to appraise, sort and catalogue different collections, attend surveys with the surveying officer, brush up on my social media skills and get to grips with archive related software. I also work one day a week at Glasgow University’s Archives and Special Collections where I am gaining experience working in a more traditional archive repository and reading room. Being able to practically apply the learning of my Archives and Records Management course has made the academic experience a lot easier for me. 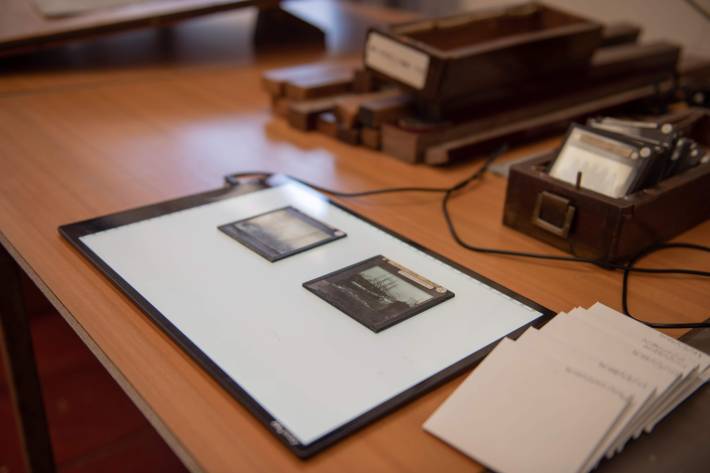 One of the Trust’s few permanent collections includes a large number of glass plates which I have been scanning and publishing to Instagram and Twitter.

Working as an archive researcher/producer did give me good grounding for retraining as an archivist. I had been to archive reading rooms, used a lot of online catalogues for research and was knowledgeable on copyright but I had no idea what a fonds was! I also used to work from home a lot so I was well prepared for that aspect of lockdown during the pandemic. The main things I have learned in my first year are that being able to get work experience while studying is invaluable; and that it is never too late to change your career. So while I may sometimes wish that I had studied archives at university at an earlier stage, I don’t regret my slightly longer journey to getting here.